All businesses have to start somewhere. This is how ours began.

Revivify is a well-known and respected business in its industry and wider community. But before this, Revivify was just an idea. An idea shared between two brothers over burgers and beers.

Spring 2018 – Toronto, ON. Chris Massel was on his way to becoming a Chef and was partway through culinary school. This was never the plan though. Sure, Chris liked cooking, but he was really just buying time to figure out what he actually wanted to do.

Frustrated with being confined in a classroom, Chris called his brother Mike to rant. Chris knew that he loved to work with his hands and engage with people but being behind the scenes in the kitchen wasn’t the right fit. Mike listened and was empathetic; he too knew what it felt like to need to break free.

Spring 2018 – Ottawa, ON. Mike Massel was established in his career as a marketing consultant. He liked the pace of the industry and was often recognized for his creative approach to problem-solving. But he too felt unsatisfied with his job.

Knowing he had the business savvy and marketing skills to succeed at being an entrepreneur, Mike thought desperately for the right service to offer. He thought back to his Summers spent painting houses; it was good, hard work. Mike could picture all the working parts in his head; he would apply his extensive experience in business and marketing to fix the pain points of the painting industry, and create an efficient, successful company.

There was no time to second guess himself. Mike called his brother to meet him at his local burger joint.

One tank of gas and five hours later, the brothers were cheersing over burgers to the birth of Revivify.

Building a Business from Scratch

“Revivify” embodies the notion of revival; we bring life back into the homes and businesses of our communities.

The transformative power of a fresh coat of paint is truly astounding. One of Revivify’s first clients was a local family in Ottawa looking to convert a former rooming house into a family home.  Of course, there was a catch – the house was in bad shape. Really bad shape. Serious smoke damage, water stains and discolouration kind of bad shape. The Team got straight to work and within two weeks delivered the former rooming house back as an unrecognizable and welcoming home.

The Revivify Team was on their way.. Chris had quickly refined his skills and become an expert painter, developing his own techniques that increased overall efficiency. Chris loved being Client-facing and built strong relationships with residential and commercial Clients. These relationships translated into referrals and booking more jobs.

Mike managed the business behind the scenes; he would work his day job as a marketing consultant then devoted his evenings and nights to Revivify. Book-keeping, preparing estimates, scheduling projects and instituting marketing campaigns for their painting services.

Before long, Revivify was booked months in advance. The business was a success, but the workload was piling up.

This was not sustainable. The brothers were at a crossroad; continue in their current roles and turn down new work as they were at capacity or restructure their business such that it could grow at the pace the market wanted.

Well, The Massel brothers were not about to start turning down work…

Mike quit his job and their plan was solidified. Chris continued working onsite and earning rave reviews from satisfied Clients and Mike focussed on bringing in new Projects.

Mike had his mind set on making Revivify’s first formal introduction to the industry at the Ottawa Home Show. Making an impression at the show as important as it is the region’s premier exhibition; tons of potential Clients flock there to choose the right service provider for their next home renovation. There are also many competitor companies that exhibit there, so standing out from the crowd and bringing value to the Client is of utmost importance.

A lot was at stake too. Home shows, especially one of this size can make or break a new business. They can be quite costly to attend but the exposure can result in booking a year’s worth of work.

Home shows are a great opportunity for new businesses to get to know the industry, meet Clients and build relationships. Just showing up wasn’t going to cut it. The brothers planned their strategy for the Home Show weekend; they designed their booth, created signage and other marketing collateral, and finally practiced with each other different approaches they would take with guests.

The Home Show weekend was a whirlwind and Revivify was now booked solid. With their calendars filled, the brothers moved on to their next step in growing the business, hiring their first employee.

“I like to work hard and make sure our Clients are satisfied” says Mike Losier Revivify’s first and longest-serving employee. Losier’s attitude, work ethic and pragmatic approach to challenges impressed the brothers and earned him his spot on the budding Team.

It was important to the Massel’s that their company grew with a Team of employees not subcontractors. They were building a brand, not just a company and wanted everyone they hired to be dedicated and committed to their core beliefs.

Commitment is a two-way street. To attract professional talent, they brothers sought the expertise of a consultant to develop a thorough human resources handbook with clear expectations outlined for all parties.

“We take care of our employees and provide a safe work environment,” says Mike. “Every Revivify franchise is fully insured and Workplace Safety and Insurance Board (WSIB) compliant.”

In an industry that unfortunately has a bad reputation for misusing subcontractors and not training new hires, Revivify had no difficulty in attracting skilled painters in search of a reliable employer.

Revivify provides a safe workplace for everyone on their Team. Employees can focus on their jobs knowing that they will get paid on time, treated well, and have clearly defined rights.

Home offices make up a significant number of these projects as people continue to work remotely, and this trend looks like it’s here to stay. Even when the economy reopens, many businesses will use a hybrid model where employees split their working time between home and the office.

In 2019, Canadians spent more than $80 billion on renovations, with just over 75 percent of this spending on home improvements. And 85 percent would rather hire a professional to do the work.

If you’re a hard-working painter, you might be tempted to cash in on this boom. But running a business on your own can be backbreaking work.

A Business that Practically Runs Itself

Are you a natural entrepreneur looking to apply yourself in a fast-paced industry? Maybe, you’ve gone down the rabbit-hole before, dreaming of running your own business but the idea of doing it ALL on your own is intimidating.

Owning a Revivify Franchise allows you to be an entrepreneur with your own business but still benefit from being part of a wider organization. Aside from the inherent advantage of bearing the Revivify name and profiting from its positive reputation there are many other supports available to franchisees, such as:

Revivify franchisees can rely on a solid business model to build a successful company.

However, there is no typical day in the life of a Revivify Franchise owner as you can be as involved as you want, depending on how you set up your business.

To start off, we recommend being hands-on so that you can really understand the business and industry from the ground up. Your painting crew start their day early. You will check in with them to make sure everyone is onsite as scheduled with their necessary equipment and materials. If the Team is starting a new Project, it’s best for you to go and meet the Client at their home to answer questions and supervise setup. As simple as it sounds, your presence at the start of a Project makes a lasting impression on Clients – they LOVE it.

Once the Project is underway, you will be able to manage the business from the fully customized and proprietary software. Making anywhere your office. Expect your days to include a combination of the following: networking, marketing, sales, administrative work, and other miscellaneous tasks. There won’t be a dull moment!

At the end of the business day, you may choose to go close down Project sites. You can take this opportunity to do quality control with your Team and check in with Clients. Being visible to the Client throughout the Project cuts down on issues that arise at the end of a Project and drastically improve overall satisfaction. When a Project is completed, you will perform a final walkthrough with the Client and solicit their review or referral!

Our values set Revivify apart from other painting franchises:

Reputation is everything. We provide skilled workmanship, perform thorough clean-up, and ensure efficient service. Our Team is friendly and approachable to Clients and always respectful, especially when in or around Client property. Revivify prioritizes Client satisfaction and works hard to ensure that we deliver our services as expected.

Our employees are skilled professionals in the industry. We treat them with respect, pay them competitive wages provide safe workplaces for them backed by clear human resource policies.

Our estimates and quotations are exactly that. Estimates provide Clients with large Projects an approximate cost while quotations are created using exact figures and measurements. Providing quotations allows the Client explicit understanding of the cost of their Project. There are no hidden fees. Transparency in our pricing is important to us as we want to build trust with our Clients and wider communities.

Revivify is a professional organization. We have developed processes, guides, and manuals for all operations of the business. This allows us to work efficiently and deliver consistently.

Revivify is looking for hard-working entrepreneurs to expand into new markets.

Contact us for more information on franchise opportunities or fill out an application today.

Email info@revivifypainting.ca with the subject line “Franchise Opportunities” and Mike Massel will get back to you within two business days.

WE’VE GOT YOUR BACK. 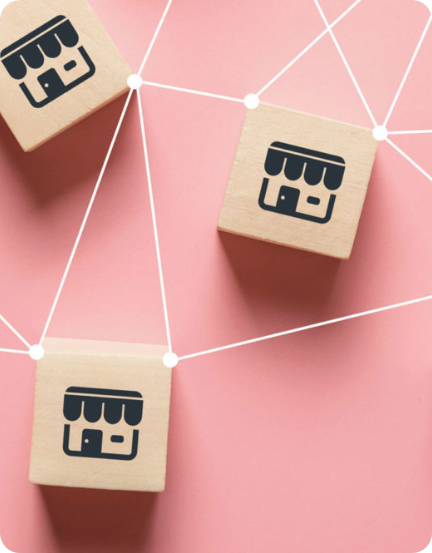 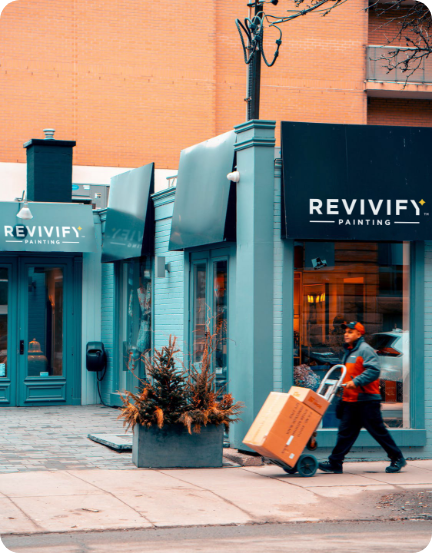 Ready to revive your life?

Do you fit the bill?

Our goal is to make life easier. That’s why it’s important
to start every project with these beliefs in mind.

We’re good at what we do and we know you’ll love the end result.

Our team is happy to address any questions or concerns you have about your project.

We pride ourselves on getting back to all of our clients in a timely manner.

We provide free itemized quotes as well as a complimentary 1-year warranty with every project.